Mortgage Rates Are Not Zero And They Wont Ever Be

They could also go higher.  One place they're not going is 0%. 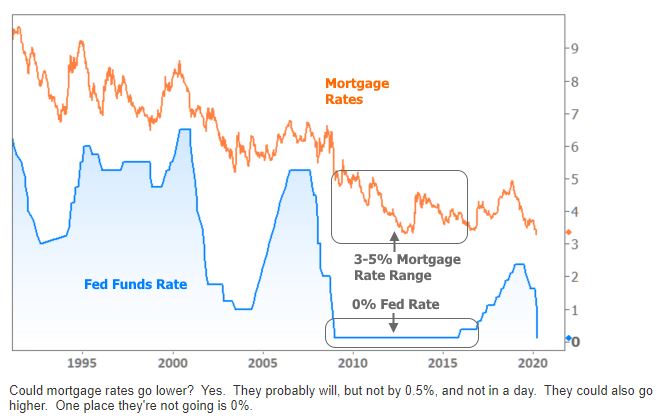 If you are a realtor or financial services professional who has asked your mortgage person about getting that nice new 0% rate today (and there are stunningly high amount of you out there if you're being honest), read it 3 times.

As a point of contact for people getting ready to make financial decisions, you have a responsibility to avoid spreading misinformation.  It engenders animosity between borrowers and lenders, and it further bogs down an already bogged down system with questions that wouldn't exist with just a modicum of effort to elevate our understanding of the rate world.

The above information comes from Matthew Graham who is the COO for the MMG.

He went on to say:

It's extremely important for the sound functioning of the mortgage market that consumers read and understand the following: THE FED DID NOT JUST CUT YOUR MORTGAGE RATES!

I'm not a loan officer.  I don't play one on TV.  I don't benefit from the decision you make on locking a mortgage rate.  I'm just a guy who watches and understands the day-to-day movement in average mortgage rates better than just about anyone.  It's one of the few things in this life I will claim to be the best at.  You can take what I'm saying to the bank, literally and figuratively.

I can't count the number of articles I've written or the variety of ways I've reported mortgage rates moving in the OPPOSITE direction as a Fed rate cut/hike, or simply staying put despite a Fed cut/hike.

While mortgage rates definitely take cues from the broader bond market (especially when markets are relatively calmer), they move for several other reasons.  That caused a lot of head scratching this week as mortgage rates jumped at the fastest pace EVER while many savvy consumers were still waiting for them to drop as much as Treasury yields had dropped.

One of the biggest reasons for the mortgage vs Treasury disconnect was a massive supply glut of new mortgage debt caused by rampant refinance demand recently.  After all, even if people felt like rates SHOULD BE lower, they nonetheless hit new all-time lows last Monday and successively broke 3-year lows in few weeks prior.  This flood of mortgages needed to be sold to investors in order for mortgage lenders to keep lending.  But investors were no match for the unprecedented spike in supply.  Like any marketplaces with way too many sellers and not enough buyers, prices rapidly fell, and falling prices on mortgages equate to higher rates for consumers.

Supply must also be considered from the lender's standpoint. Even in cases where lenders still had money to lend, the record surge in refinance demand forced them to raise rates simply to slow the flow of new business.

To add insult to injury, 10yr Treasury yields moved significantly HIGHER throughout the week.  So even if mortgage rates could have overcome all of their own specific issues, their typical guidance giver was still telling them to move higher.

Bottom line: mortgage rates have had no reason to move lower this past week and every reason to move higher.  The Fed's QE (just announced) sounds like a lot at $200 bln, but in this market, it won't even cover 2 months' worth of new mortgage supply.  It's a token handout meant simply to ensure the mortgage market continues to function smoothly, and not nearly enough to drop us instantly back to all-time lows.  It's a tourniquet, not a panacea.

Where rates go from here will depend on where the bond market goes. To be sure, there's a very good chance that yields will stay extremely low and move lower due to what many see as a fairly large and inevitable recession.  If that increasingly looks to be the case, mortgage rates will gradually return lower, BUT--and this is the important "but"--MORTGAGE RATES AREN'T DROPPING 0.50% TODAY AND THEY'RE NOT ANYWHERE CLOSE TO 0%.  They were a lot closer to 4% on Friday afternoon (many scenarios were pricing-out higher than that). 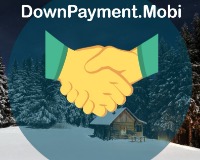 Want to Advertise on this Site?

Mortgage Rates Are Not Zero And They Wont Ever Be

Could mortgage rates go lower?  Yes.  They probably will, but not by 0.5%, and not in a day.  They could also go higher.  One place they're not going is 0%.If you are a

Have you ever had a broken light bulb and had no idea how to get it out? Turns out "The Moeller Group's" Niki Moeller has a good trick for you that involves a potato! Check it out!;

What Is An Escalation Clause

Have you heard of an escalation clause when making an offer when buying a?

By registering, you agree to our terms of use and that real estate professionals and lenders may call/text you about your inquiry, which may involve use of automated means and prerecorded/artificial voices. You don't need to consent as a condition of buying any property, goods or services. Messages/data rates may apply.